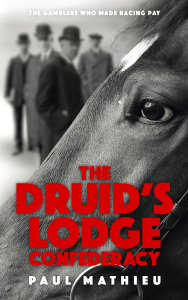 Originally published in 1990 but now revised and reprinted by Racing Post Books, ‘The Druid’s Lodge Confederacy’, by Paul Mathieu, tells the intriguing story of a group of individuals who joined forces to wreak havoc on the betting ring in the first years of the 20th century.

While you may have (as I do) mixed feelings about the disguising of a horse’s ability in order to hoodwink the bookmaking fraternity, there remains something both fascinating and engaging about a well-orchestrated coup. Modern day exponents such as Barney Curley (a fan of this book himself apparently) tend to limit themselves, or at least their more spectacular raids, to one-off occasions, often few and far between. Such is the scrutiny in these days of high- technology, that repeated doses would arouse not only suspicion but would surely result in the goose that lays the golden eggs finding itself located in a roasting tin.

No such technology existed in the early 1900s, opening up a wider range of possibilities for the less morally scrupulous to take advantage. But that doesn’t mean that it was an easy matter. Stewards, on the whole, were just as keen as today to eliminate blatant manipulation of the system. Handicappers were also able to take decisive action to derail a plot. And, just as members of today’s racing public are not unanimous in their admiration for Curley’s antics, so it was in those days. No one likes to be duped when money is on the table.

So it is therefore testament to the skill and wiliness of the ‘Confederacy’ of the title, whose activities centred around a training establishment at Druid’s Lodge on Salisbury plain not far from where Richard Hannon’s yard now sits, that they were able not only to negotiate their way around both steward and handicapper, but were able to do so on an unprecedented scale over many years, winning vast fortunes in the process.

Mathieu’s book introduces us to the 5 main members of the group and to the young Irish trainer, Jack Fallon, brought over to manage the training of the horses in such a way as to achieve the group’s goals of relieving the bookmakers of as much cash as possible. It doesn’t take long before the group is successful, thanks to the divergent and complementary skills of the individual members, each fulfilling a specific role, and Mathieu leads us in chronological fashion through the key highlights of the Confederacy’s plundering of bookies far and wide.

The book works, for me at least, on two levels. Firstly, it appeals as an interesting and absorbing historical account of racing and the racing landscape of that time. This was the time of Sceptre and Pretty Polly, a time when racing enjoyed widespread popularity and when the sport was undergoing some significant change. The racing world was becoming smaller and American jockeys were becoming frequent visitors. Travel, for both humans and racehorses, was becoming easier (if not easy). As racing eras go, this period was, and remains, an extremely interesting one for a variety of reasons. Mathieu captures much of this sense as he paints the backdrop and sets the scene for the activities of the Confederacy.

Secondly, success is always of interest, as are people, and what made this venture a particular success was not only the meticulous planning which lay at its core, largely the domain of Percy Cunliffe and Wilfred Purefoy who between them largely masterminded and financed the operation, but its execution. Not only did the right horses have to be bought, they had to be trained not only to deliver the coup de grace when the appointed day came, but also to run in such a way as to avoid too much suspicion, or harm to the horse, while the groundwork was being laid. This relied not only on Fallon’s outstanding training expertise but also on the skill of another member of the group, Homer Peard, an Irish vet. Mathieu’s depiction of the individual roles of each member of the group and of how they coalesced to produce an operation that was both revered and feared in equal measure is eminently readable and highly engaging.

Those searching for today’s equivalent might look to Curley, but I’d be more inclined to look at Ballydoyle. The methodology may be different, in the case of Ballydoyle it is the production of high earning potential bloodstock that is the raison d’etre hence there is no need for the duplicity employed by Purefoy et al. But there are certainly strong similarities in the approach; a tailored training establishment dedicated to the one solitary purpose, the employment of a gifted young trainer, dedicated veterinary input, all masterminded and financed by a select group of individuals who stand to reap enormous rewards from the successful delivery of results.

Of course there were some specific requirements to be met at Druid’s Lodge which John Magnier has no need to consider. Of those secrecy was perhaps the most important. Mathieu describes the lengths to which the group went to keep unscrupulous stable staff from spreading any ‘word’. They would be locked up at night, have their correspondence censored and, as one lad discovered when on the receiving end of some lead shot from the barrel of trainer Jack Fallon’s shotgun, woe betide anyone suspected of giving the game away.

Extreme lengths you may think, and certainly measures it’d be impossible to bring to bear today, but the Confederacy were betting in quantities of money that transcended any seen before or, arguably, since. You may wonder, as you ponder over seeing your bets with an online firm limited to less than a tenner, how they managed to place bets to win, in today’s terms, amounts reaching not only seven but sometimes eight figures.

The answer was, not very easily. It relied on a complex network of agents plus meticulous and timely execution of the strategies employed by Purefoy (it being he who looked after this aspect) to ‘get on’. Leakage of the outcome of an important gallop or trial could see a price tumble before the Confederacy had a chance to fill their boots, hence the obsessive secrecy.

Mathieu describes the evolution of the Confederacy in fine detail. Purefoy’s meticulous planning of each coup is more than matched by Mathieu’s meticulous research. But the book doesn’t become bogged down in facts, figures and lists. The contextualising of the events in their time and the description of the unfolding story in human terms render it entertaining and readable throughout.

Whether you are a fan of racing history, or are intrigued by the idea of what was, in its time, a revolutionary and visionary approach to beating the bookmakers, or even if you just enjoy a good story, you’ll join me in welcoming the re-publication and updating of this terrific book.

One thought on “Book review : The Druid’s Lodge Confederacy by Paul Mathieu”