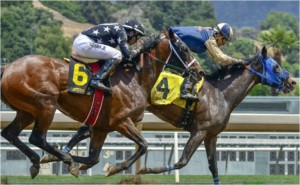 The Kentucky Oaks: A Kentucky Derby Championship Series For A Cause

A part of Kentucky Derby racing tournament let’s talk about the Kentucky Oaks Championship Series that had kicked off last Saturday, February 16, 2019. The Kentucky Oaks or Longines Kentucky is the country’s elite and premier horse race for three-year-old fillies. These are attended by all female horses the day before the Kentucky Derby will take place. This tournament features a $1 price at stake in the Grade 1 category. The winner is then worn by a lily in which a term “lilies for fillies” has started. The Kentucky Oaks is one of the longest-running kentucky derby championship series which is annually celebrated along with Kentucky Derby. It had maintained its format since it was inaugurated in 1875.

Aside from that, the Kentucky Oaks is also the fourth most celebrated and attended horse racing tournament in the United States. This follows the Triple Crown Series which is composed of Belmont Stakes, Preakness Stakes, and of course the Kentucky Derby. The best thing that makes the Kentucky Oaks different from other horse racing show is the purpose of the tournament. Not only that, but it also showcases fashion and color, and celebration of every womanhood. The fillies are said to be an instrument of a strong woman. Most importantly, this serves as a fundraising show for women who faced critical health issues.

Other from what was stated, let’s take a look at to some reasons why Kentucky Derby Oaks is something you have to attend as a horse racing fan before going to the main event. These things will help you understand the purpose of the show and at the same time it will open up your eyes and hearts seeing how wonderful it is to see an event for a women cause.

During this event, the racetrack is always attended by an approximate 100,000 number of guests. Not only the audience makes the show colorful and entertaining, but the theme of the show. The whole racetrack is filled with colors of pink. It comprises of pink buntings, flowers, and most importantly, you will see most of the people wearing pink attire. The pink attire does not only add color to the event, but it is an indication of support to raise some funds to help women who suffer ovarian and breast cancer.

After the race, the event is the culminated through a parade called the “Survivors Parade”. This parade is composed of women who survived the ovarian and breast cancer. This is usually done in the racetrack field at Churchill Downs where the race had taken place. Apart from that, it has also been reported that for the last eight years, the event was able to raise an amount of more than $820,000.

Also, along with the Pink Organization for the Kentucky Oaks, they decided to work with the Breast Health Program which is founded by the Norton Cancer Institute. This cause aims to help every cancer patient to assist the cost of their medication using advanced technology for a quicker and faster recovery. The Norton Cancer Institute is also the first health care institution that was able to build the newest advanced instrument for chemotherapy purposes. Through the Pink Out program of the Kentucky Oaks, they want to help every female cancer patients to take the medication at no cost or possibly no charge at all.

Not only because the Kentucky Oaks is a horse racing event doesn’t mean you can’t be fashionable in. When you are to attend this event, it is a requirement that you have to wear pink in support of the organization’s advocacy. Since the tournament is attended by a lot of guests especially celebrities, you will see varieties of pink fashion trends and dresses worn by celebrities designed by popular fashion designers.

Additionally, the Kentucky Oaks organization also encourages every spectator to wear pink before gracing the event to honor the event’s official flower which is the stargazer lily. Also, bear in mind that a prize which is the Longines watch awaits for the person who wears the most fashionable and creative pink attire.

It may not sound as important as the Derby Kentucky to you, the Kentucky Oaks is something you need to experience before the main event should take place. Remember that the Oaks does not only support the best female horse racers which will grace the event but at the same time, it holds a great cause of supporting women who are suffering from health issues. That said, the Kentucky Oaks is a combination of entertainment and charity works.

Jumping makes it real return today - 'when the clocks go back, it's the end of the flat' - our own saying at TRF but one we set our timepieces by... who wins the Sodexho Gold Cup - read what our members think and have your own say https://theracingforum.co.uk/forums/topic/sodexo-gold-cup-2020/

A horse has started 10 times, all at 4/1. It’s raced right handed 5 times and won 3. Left handed raced 5 won none. Significant or not? Can the significance be quantified?