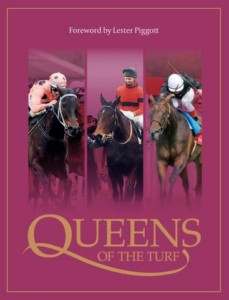 Bruce Millington points out in his introduction to Queens Of The Turf that there is something ‘even more special’ about a champion racehorse when that horse is a filly or mare and I’m sure we all have a special affection in our hearts for many of the great females that have graced the sport.

This book brings together 50 of the greatest, selected by the Racing Post team, and we are treated to a short summary of the career of each, punctuated by high quality photographs throughout.

The task of selecting the 50 must have been daunting (Millington hints at such in that intro) but it’d be hard to argue too much with the list they’ve come up with. There is a bias towards recent history with horses from the 1970s and onwards dominating almost exclusively (only six of the fifty pre-date 1970 and you had to have been a REAL superstar to figure in that group). That won’t be a problem for most readers I reckon, given the book is designed more of a light read than as a historical account.

Neither does the book present itself as an authoritative guide to the relative merits of the horses included. ‘We quickly agreed this would be a celebration of the best female talent throughout history rather than a handicapping exercise’ says Millington. For ‘best’ then we should probably read ‘most popular’ but, again, this isn’t necessarily to the detriment of the book.

The essays themselves are short, averaging 10-12 paragraphs, and the brevity of them means that the writers can only skim over the career of each horse. But what you do get in each essay is a strong sense of what is was, beyond pure ability, which made each horse special in terms of the public’s affections.

On Allez France, Scott Burton: ‘…to her adoring public at home, there was only one queen of Longchamp.’

On Time Charter Julian Muscat illustrates a telling point: ‘In her time there wasn’t a single Group 1 race in Britain for older fillies and mares, which meant that the best fillies were invariably retired after their three-year-old campaigns. Only those of Time Charter’s exceptional ability could prosper thereafter.’

The essays are written by various members of the Racing Post team meaning a slight contrast of styles but this doesn’t detract. In fact, the sense of the book being a ‘fan’ celebration of these horses is accentuated by the variety of writers.

The photographs are excellent. Each essay is accompanied by one or more photos and they tell their own graphic stories. Annie Power’s last flight fall, Enable winning in the rain at Ascot, a wonderful photographic study of Rachel Alexandra and Luke Nolen’s panicked last 50 yard thrust on Black Caviar at Ascot are all brought to life.

Reading through the book brought back many memories for me and I think therein lies the book’s appeal. Focusing primarily on the last 50 years or so, any racing fan around during that time will find their own memory banks stirred fondly by this book. It is easy reading and equally easy on the eye. I read it through from start to finish for the purpose of the review but it is the type of book that can be picked up and set down when time allows.

It’d be interesting to see what people think of the list of those included. I thought long on the topic and I’d like to have seen Marwell included, possibly at the expense of Winter whose status perhaps relies on recency rather than merit in the context of greatest of all-time, fine though she is (current stars Enable and Winter are both included). Plenty of non-British or Irish stars are included with French fillies well represented. Lester Piggott, who writes the foreword, mentions one he possibly feels was an omission, making reference to Carozza on whom he won the Oaks for the Queen in 1957.

I’m not sure what you may be getting, or giving, for Christmas, but if you do know a relative or friend who is into racing, of if you are compiling your own Christmas list of wants, I think unwrapping this book on Christmas morning and finding a quiet corner after Christmas lunch and slipping away to relive All Along’s Arc, Habibti’s King’s Stand or Dawn Run’s Gold Cup would make for a perfect interlude during that non-racing day.

I think Lester sums up the book in the last sentence of his foreword: ‘This book is a wonderful way of celebrating the fillies and mares who have illuminated racing over the centuries.’