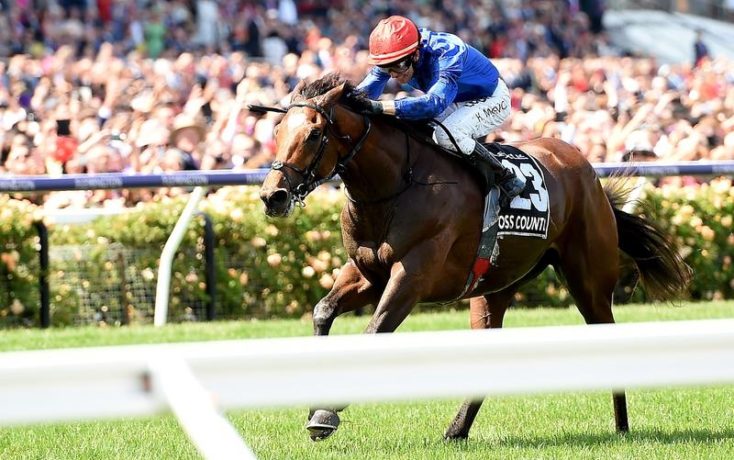 Stradivarius has strengthened his grip on the European staying division with a third successive victory in the Goodwood Cup in which Melbourne Cup winner Cross Counter finished third.

The John Gosden-trained Stradivarius enjoyed a faultless campaign in 2018 – winning the Yorkshire Cup, the Gold Cup, the Goodwood Cup and the Lonsdale Cup to land a bonus through the inaugural Weatherbys Hamilton Stayers’ Million.

For good measure, the five-year-old added the British Champions Long Distance Cup at Ascot in October and has continued in the same vein this term – with successful defences of the Yorkshire Cup and the Gold Cup setting up his Goodwood hat-trick bid.

The Bjorn Nielsen-owned chestnut emulated the popular Double Trigger by becoming a three-time winner, and the 4-5 favourite ultimately did so with the minimum of fuss.

Frankie Dettori was happy to play a waiting game as Wells Farhh Go set a strong pace and quickly opened up a huge lead. He began to falter, however, and it was left for the big guns to fight it out.

Dee Ex Bee did his best to draw the finish out of Stradivarius, while Cross Counter travelled into the race smoothly.

But neither could live with the trademark finishing kick of Stradivarius.

“He is a gorgeous horse,” Gosden said.

“Wells Farhh Go is smart and I know he went too hard, but it is a dangerous thing to give someone 25 lengths around here and he is a good horse.

“He was wide early in a muddle, then he got where he wanted and followed Cross Counter and he is a proper horse as he and Dee Ex Bee are good older horses.

“I was not comfortable early in the race – from halfway through the race I was comfortable, as I knew he was tracking a proper horse in Cross Counter and with Dee Ex Bee in his sights I knew Frankie had them in his line.

“He came and won his race and then our great hero (Dettori) started waving at the crowd. I must say that’s a little dangerous as the horse is a pro and when Frankie said that’s enough he said, ‘OK, I’ll put the brakes on’.

“It was lucky Frankie didn’t go over the handlebars, I thought.”

Cross Counter remains the $15 favourite for the 2019 Melbourne Cup.