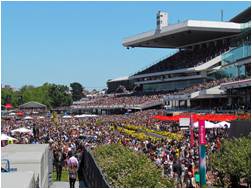 Reigning Melbourne Cup champion Cross Counter will return to Australia to defend his crown after competing in an epic Goodwood Cup race at the end of July. The 2018 winner of ‘the race that stops a nation’ was in contention entering the final furlong at the Goodwood event before the Bjorn Nielsen-owned Stradivarius overtook him and Dee Ex Bee to win the race for the third time.

There was no shame in being beaten by just 1 3/4 lengths in such a thrilling contest against a horse who has already claimed a place in racing folklore. The fact that Stradivarius was being guided by the in-form Frankie Dettori also highlighted the level he was up against. Stradivarius now has eight-consecutive victories to his name.

Trainer Charlie Appleby will hope to bounce back by preparing Cross Counter for a defence of his crown – look here for Melbourne Cup offers  – at Flemington Park. The story might have been different had the four-year-old won at Goodwood but a trip Down Under now seems like the most sensible option.

Preparations for Melbourne may include a shot at the Irish St Leger depending on what shape he is in ahead of that race. But, whatever the trainer decides, Cross Counter has proved he has progressed and can now mix it with some of the best stayers in the business.

A defence of his Melbourne Park title will not be a walk in the park for Cross Counter. The handicapper will have some influence on his chances and there will be no three-year-old weight allowance this time around. He will also be up against the experienced six-year-old Marmelo, who will be given the chance to improve on last year’s second-place finish. Cross Counter is the early favourite in the horse racing odds with prices of around 16/1 available  while Marmelo can be backed at 25/1.

The Joseph O’Brien-trained Master of Reality pipped Cross Counter to grab third place in the Ascot Gold Cup, won by Stradivarius for the second year in a row. The four-year-old (by Frankel) has all the right connections with father and son owners Lloyd and Nick Williams boasting six previous Melbourne Cup winners. Master of Reality is currently priced at 20/1 across the board. All eyes will be on the weights to be allocated by handicapper Greg Carpenter of Racing Victoria.

There have also been rumours that Dee Ex Bee could compete in Melbourne but nothing has been confirmed. His inclusion would certainly add some quality to the field. However, he may be weighted out of contention after such a strong season.

Cross Counter stable-mate Ispolini could also be one to watch and should fare better off the weights having only won at Group 3 level and been placed in a Group 2. The four-year-old is currently priced at 25/1 to take the crown in Victoria.

If the aforementioned horses all make it to the starting post, the 2019 Melbourne Cup could produce a race for the ages.

Best ever riding performances in the Derby? Have your say on TRF https://theracingforum.co.uk/forums/topic/best-riding-performances-ever-in-the-epsom-derby/

OTD 1950 Fourteen-year-old Lester Piggott lost his apprentice allowance when he rode Zina to win the Autumn Cup @BrightonRace.... a career in which he rode 4,493 winners including 30 British Classic winners and was Champion jockey 11 times. 🏇#TheLongFellow #AnAllTimeGreat