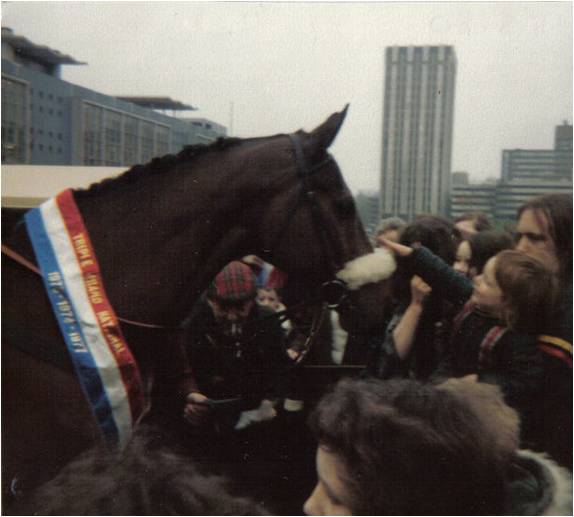 Red Rum Photo by Rick Weston under CC BY 2.0

April could see history being made as Tiger Roll bids to win a third Grand National. Only the legendary Red Rum has achieved that feat in the long history of this race. However, Tiger Roll is trying to win the National for the third year in a row. What if the pair met in a race, could Tiger Roll beat Red Rum?

Attempting to predict such a race is not an easy task. It’s a bit like trying to decide who would win a fight between Muhammad Ali and Tyson Fury or is Cristiano Ronaldo a better player than Pele. There are so many ways of looking at a battle of the generations between Tiger Roll and Red Rum, but this article will give it a good go. Let’s start by looking at the respective careers of these two horses.

Red Rum may well have won this four-and-a-half-mile race, but he was the son of a Derby winner. His debut was in a five-furlong race at Aintree. He dead-heated for first place in that race, but no one could imagine how exciting his future races would be.

He was incredibly consistent in the Grand National and came close to achieving the feat of winning it in three successive years. His first win came in 1973 producing a fantastic finish to claw back 30 lengths on Crisp. He followed that up with another win in 1974 and also won the Scottish National that year.

The hat-trick didn’t happen though, and Red Rum finished second in both 1975 (to former Cheltenham Gold Cup winner L’Escargot) and 1976 before that record-breaking third victory in 1977 despite showing poor form earlier in the season. He won that third National at the grand old age of 12.

Tiger Roll didn’t race over the flat even though he was the son of a Derby winner. He was quick to show his potential over hurdles. In only his third race he won the Triumph Hurdle at the 2014 Cheltenham Festival. He had a barren spell between 2014 and 2016 losing in nine races before a win in a Beginners Chase.

Whereas Red Rum seemed to reserve his best for Aintree mainly, Tiger Roll has had great success at both Cheltenham and Aintree. He’s won four races at the festival including the Cross Country Chase for the past two years. His first National triumph came in 2018 winning the race by a head from Pleasant Company. Last year’s win was a bit more comfortable with Tiger Roll winning by two-and three-quarter lengths. It’s no surprise that Tiger Roll is the 5/1 favourite to match Red Rum’s record and win a third National.

Tougher fences in the past

So, who would win a race between these two legends? Back in the 1970s, the Grand National was a much tougher race to win. The fences were a lot stiffer than they are now, and the number of horses falling was greater then. That didn’t phase Red Rum though, in a career that stretched into three figures, he never fell in a race.  Only once has Tiger Roll unseated his rider but he has been pulled up a few times.

The modern-day Grand National has seen many changes to the course. The fences are still a major challenge, but the number of fallers (and sadly fatalities) have dropped. Both are relatively small horses up against these big fences. We would expect Red Rum to get around the current course, but could Tiger Roll have coped with those seen in the 1970s?

Weight and age a key factor

The amount of weight carried is another significant factor. Red Rum won his second Grand National carrying 12 stone around Aintree. Tiger Roll had ten stone 13lbs in 2018 and 11 stone 5lbs last year. He has 11 stone 10lbs for this year’s record-breaking attempt. If he can win with that weight on his back against tough opposition, then he would have to be considered likely to beat Red Rum. In terms of age, Tiger Roll has won his races at the ages of eight and nine, the same age as the first two wins for Red Rum.

There is a high class of runners in the modern-day Nationals. Yes, Red Rum lost to L’Escargot, but four years had elapsed since that horse won the Gold Cup.  Tiger Roll’s winning time last year was just faster than the quickest time set by Red Rum. Tiger Roll has a rating of 172 and is a Triumph Hurdle winner. That fact alone indicates that Tiger Roll would beat Red Rum, but both are legendary horses.

Wow....now that is a statue

A couple of 12/1 shots to consider for tomorrow - both run at Kempton https://theracingforum.co.uk/racing-articles/david-cormacks-saturday-selections-february-27th/