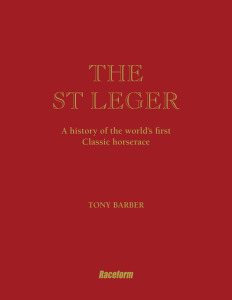 The St. Leger, as a test over what was originally deemed a ‘dash’ distance of one and three quarter miles, started life sitting outside the fashion of the day, a fashion that favoured events over longer distances. In an ironic evolutionary twist it still maintains a position outside of fashion almost quarter of a millennium later but now that position is linked to it being seen as a slightly unfashionable stamina test.

In the period between its birth and the present day it became at one time the most important race in the world. However, it is perhaps an indication of the changes in fashion which have seen shorter distance races grow in stature along with a decline in popularity and status for stamina-based events that Tony Barber’s ‘The St. Leger’ is the first book written about the history of the great Yorkshire race in over a hundred years.

Barber, a Doncaster born historian and retired teacher, has spent 14 years researching the book. A labour of love, Barber cites visits to Doncaster with his father, a coal miner, to see the St Leger as the precursor to a lifelong relationship with the race. Indeed, he was there when Nijinsky won in 1970, sealing a famous triple crown, a feat Barber feels will one day be seen again.

The book’s length, over 500 pages, reflects both the lengthy time-span covered by the book and also the depth of detail that Barber has gone into in order to provide a sublimely comprehensive account of not only the St Leger but also the history of Doncaster racecourse and the many intriguing figures who shaped the race and racecourse during their existence.
Introduced by the Earl of Halifax with a foreword by John Gosden, ‘The St Leger’ is separated into six sections. The first describes how racing had come to take place at Doncaster and how the course evolved in its earliest days. It then explores some of the mysteries, mostly unsolved, behind the origins of the race. Even the naming of the race remains a mystery. We are given an early indication of the rigorous approach taken by Barber during this first section, full of detail while maintaining the good historian’s natural caution and care around establishing a factually robust account. That rigour is applied throughout, much to the book’s benefit.

What he evokes in that section, covering the early period of the race’s history, is a sense of how chaotic, loosely governed and unplanned horse racing was in those days. And also a sense of how important the North, and Yorkshire in particular, was to both the evolution of racing and the racehorse as we know them both today.
We are also given in early indication in this section of the excellent illustration we’ll find throughout the book. Well reproduced, high quality illustrations adorn almost every page, often more than one on a page, and are a real treat. Indeed, the book features something which wasn’t thought to exist, a recently discovered portrait of Colonel Anthony St Leger himself, the gentleman for whom the race is named.

Sections two through five provide chronicles of specific periods in the race’s history. We are introduced not only to the great horses and people whose names adorn the Leger’s roll of honour but we are also introduced to many who inhabited the dark side of the game and shown that sometimes those associated with the race’s many facets were not always as honourable as they may have seemed.

Each period is painstakingly researched and the comprehensive history that Barber has assembled is presented in a readable format, again lavishly illustrated throughout. More than just an ‘everything you ever wanted to know about the St Leger’, although it fulfils that function admirably, it serves also as a compelling commentary on the history of racing, such is the Leger inter-twined in the wider history of the sport and vice versa. The history of Doncaster racecourse is a prominent feature, Barber’s very clear interest, knowledge and research of local history ensuring that we are treated to a very comprehensive and authoritative account of the history of the stage on which the St Leger is played out on each year.
It is an important book. The St Leger, despite the waning of its popularity and status, arguably somewhat reversed in recent years, remains one of the world’s great races and the race deserves a book such as this. Barber must have been conscious of the need to produce something not only comprehensive but also something befitting the special and unique place the race occupies in racing’s history and in the history of the local area.

He has risen to that challenge, ‘The St Leger’ is not only authoritative, it is also entertaining and he can rest easy in the knowledge that his book has lived up to the special nature of its subject matter.

‘The St Leger – A history of the world’s first Classic horserace’ has been printed in a limited edition of 800, each individually numbered and signed by the author. It is printed on gloss paper and bound with gilt edges and ribbon markers. At £75 it isn’t cheap but, if you are a fan of the St Leger, racing in the north of England or, indeed, British flat racing generally, it’s worth every penny. If you baulk at that price tag yourself, Christmas is just around the corner and you should do your utmost to persuade someone to get it for you. I can’t think of many more pleasant or absorbing gifts a racing fan could wake up to on Christmas morning.