Book Review – The Scudamores – Three Of A Kind’ by Michael, Peter and Tom Scudamore with Chris Cook 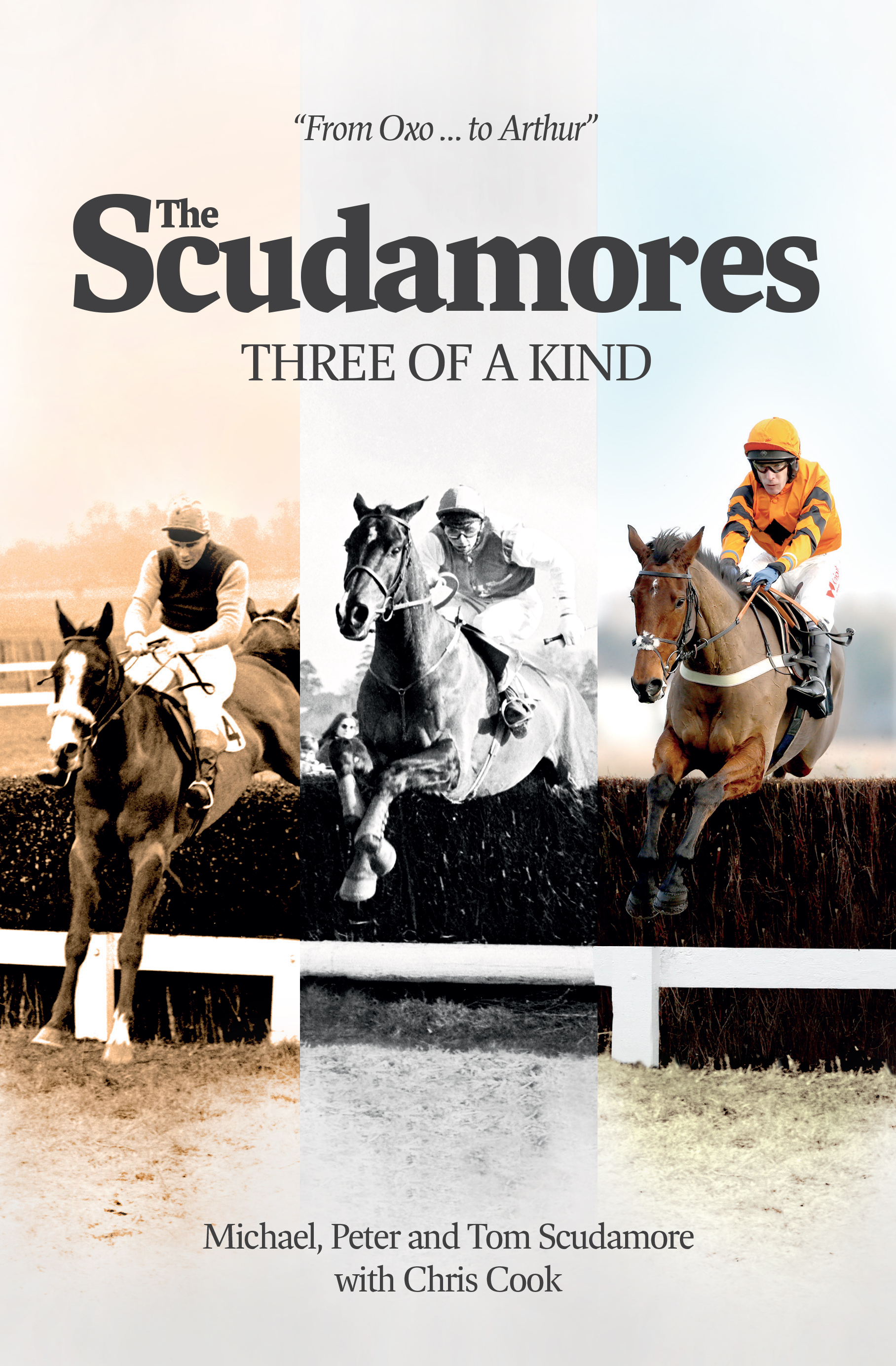 Over the last 70 years the surname Scudamore has been ever-present in the jockey and trainer ranks in UK jumps racing. The family have been at or around the centre of National Hunt racing for three generations and all followers of the jumping game will be familiar, to varying extents, with their story.

Behind the headlines, the Gold Cups, the Grand Nationals, the jockey’s championships, sits the personal tale of each of the individual Scudamores, each different by dint of both circumstance and character.

John Francome uses the word ‘honest’ to describe a defining characteristic of the family and it is that honesty that allows Chris Cook, racing correspondent for The Guardian, to weave a series of interviews and discussions into a fascinating book that allows us to delve below the surface and learn not only about the Scudamores but also about how National Hunt racing has changed and developed these last seventy years.

In the book Michael, Peter and Tom Scudamore, the ‘Three Of A Kind’ in the book’s title, are assisted by a supporting cast that includes Peter’s other son, trainer Michael Scudamore Jnr, in providing a detailed insight into the lives and times of this remarkable racing family.

Their individual stories are told through the recounting of interviews. The book outlines the evolution of their careers, in their own words, from their earliest beginnings Energy Bet promo code , through their lives as professionals and, in the case of Michael and Peter, their lives after the days in the saddle were over.

They look at how ‘being a Scudamore’ means a different thing to each, how each was motivated by different things and how different they are as characters. Michael’s doughty toughness, fashioned in an age when there was no shortage of tough men, Peter’s intensity and single-mindedness and Tom, who never thought of anything else other than he would be a jockey. We get a sense of the character of each as the chapters unfold.

There are chapters focussed on their views and on stories relating to specific aspects of racing including one devoted to Cheltenham and what it means to each of them (each one of their festival winners are focused on as they reflect on what each meant). Somewhat topically, there is an entire chapter on the whip.

They talk about riding, training and, of course, they talk about Aintree. In between they cover a whole gamut of racing related issues. Female jockeys, Martin (and David) Pipe, fences (and changing of), racecourses and a multitude of racing people are all mulled over and each of their varying and sometimes divergent views are laid bare.

The honesty that Francome highlights is prevalent throughout. To the credit of each, it is a candid portrayal. We learn that Tom considers one of the country’s top venues a ‘dog track’ (you’ll have to buy the book to find out which one!)

Peter highlights what he feels were hypocritical views on his whip use in his early days, contrasting how he was viewed against the plaudits awarded to Lester Piggott: ‘You can’t have, on the one hand, people saying Piggott is the greatest jockey and he’s given The Minstrel ten in the last stride and that’s great for him – but it’s a welfare issue when you do it.’ More eye-catchingly Peter admits to having ‘stopped a horse’ once in his very early days. For a trainer he doesn’t name as he’s still alive but who was/is ‘a right *******’.

Peter’s recent life at Arlary as partner to Lucinda Russell provides triumph and tragedy. One For Arthur’s Grand National win an obvious highlight. ‘I was so pleased for Dad and Luce’ Tom says, adding ‘Dad was getting fed up not being able to compete at that level, that it was getting harder racing in the north.’  But tragedy had preceded that win as the stable came to terms with the death of stable jockey Campbell Gillies, whose life was lost shortly after the stable had been dealt the bitter blow of losing their Cheltenham festival winner Brindisi Breeze who Campbell had ridden so brilliantly to win. Campbell’s mother, Lesley, contributes poignantly as Peter and Lucinda discuss those difficult days.

It is a very readable book. The format works very well and it has been structured such that there is a fairly natural flow to it that takes you along. With Peter and Tom’s stories relatively well known I found the parts relating to Michael’s career interesting. In terms of understanding their nature the book reinforces Peter’s serious approach to life and to racing. There are also hints at some of the conflicts natural to any family, for example Tom and Michael Jnr’s shared frustration that Michael Jnr wasn’t given the chance to spend some time learning the training trade elsewhere before having to go it alone when Peter moved to Scotland.

Tom’s lighter character is apparent but so too is his own drive and determination. And I also wondered, reading it, if it shouldn’t have been called ‘Four Of A Kind’ as Michael Jnr’s contribution to both the book and his own success as a trainer (the story of Next Sensation’s Cheltenham win gets a chapter of its own) surely entitles him to be viewed as a fully paid up member of the racing Scudamores.

Best of all though are the racing reminisces. In the chapter entitled ‘Getting Lower In The Saddle’ a host of the great jockeys from the last fifty years and more talk about the changing face of the jumping game. It’s a fantastic read. I liked John Francome’s story about Fred Winter turning up for a schooling session at Ron Smyth’s and putting a riding helmet on. ‘You’re not schooling here with a helmet on son,’ said the trainer.

Anyone with an interest in National Hunt racing and its history will find this book thoroughly enjoyable and I’d recommend it heartily. Just the thing for those long winter nights by the fire as a winter of racing unfolds and the Scudamores, as they surely will, write their family name even more indelibly on this great sport.

Wow! What an honour it is to have won @thesundaytimes Sportswoman of the Year award! Thank you to everyone for your kind messages! #SWOTY 😀