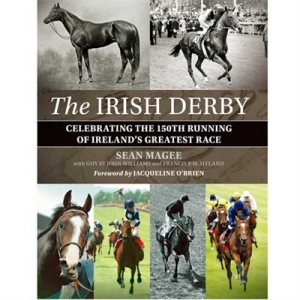 Jack Hobbs’s win in Saturdays Irish Derby marked the 150th time horses had galloped across the Curragh in pursuit of Ireland’s premier racing prize. While the Irish Derby is now a race which attracts some of the very best three year old thoroughbred talent from around Europe, it was not always thus and Sean Magee’s new book ‘The Irish Derby – Celebrating the 150th running of Ireland’s greatest race’ tells the history of what started as a low key event, two previous attempts at copying the Epsom Derby format in Ireland having failed, before its place of prominence in the European flat race calendar was assured in 1962 when Joe McGrath contrived to pull together a deal with the Irish Hospital Sweepstakes which made the race the richest in Europe.

Told in seven chapters, the book draws on previous material (primarily Guy St John Williams and Francis P.M. Hyland’s ‘The Irish Derby 1866-1979’, Williams and Hyland are in fact co-credited with Magee in this title) and Magee states at the outset ‘this volume makes no claim to offer new major historical research’. It is rather, as implied by the title, a celebratory rather than scholarly work and indeed Magee states as much in his preface. That is not to say the book isn’t rich in accurate historical detail, more that the nature of it means that it is more ‘highlights’ than comprehensive history.

The first three chapters reflect on the early, pre-Sweeps, years of the race, including a chapter devoted to the interesting tale behind Orby, the colt who, in 1907, became the first horse to win both the Epsom Derby and Irish Derby, and his somewhat colourful owner, Boss Croker.

There are several entertaining vignettes painted in chapter three’s telling of the ‘Upward Curve’ the race enjoyed throughout the twentieth century, Sir Cecil’s Boyd-Rochfort’s hiring of a cinema in Newmarket for a week to repeatedly show a recording of the 1953 race, won for the first time by a young trainer named Vincent O’Brien upon the disqualification of Boyd-Rochfort’s colt Premonition being one such. Boyd-Rochfort was so incensed by the decision that he hired the cinema to illustrate to all and sundry in Newmarket what an injustice had been served across the water.

The story of what should have been O’Brien’s third winner of the race, in 1960, is also a fascinating read. Disqualified from training for 18 months and forced to move out of Ballydoyle following the finding of a prohibited substance in a post-race test on a horse called Chamour (ironically a son of his first winner Chamier), O’Brien had to hand his license to his brother Phonsie and it was thus Phonsie’s name that appears in the record books as the trainer of the 1960 winner, who, with another ironic twist, turned out to be the self-same Chamour. Imagine such an episode playing out in this day and age!

Chapters four to seven take us through the period when the race really took off as an international contest and describe just how Joe McGrath and others elevated the race from what was largely a provincial affair to the richest race in all Europe. McGrath was clearly a mover and shaker par excellence and the book’s description of how he shaped the ‘Irish Sweeps Derby’ illustrate what a seismic impact events of 1962 had on the European hierarchy of top races. Peter O’Sullevan (now Sir Peter O’Sullevan) is quoted thus: ‘It remains to congratulate the Irish authorities and all associated with this great Irish enterprise upon a triumph of organisation which set a new standard for international racing.’

Chapters five and seven deal with the impact on the race of those two great titans of modern day Irish training, Vincent and Aidan O’Brien. Vincent’s dominance of Irish flat racing seemed to many of us, as his career ended in the 1990s, something we would never see the like of again. How remarkable then that, before the sunset of Vincent’s career had hardly dimmed, Aidan would appear and that he would not only match his legendary predecessor but would eventually come to eclipse many of his records. Both had a hugely significant impact on the Irish Derby and both chapters will be of great interest to all followers with an interest in Irish racing and in those two individuals and their associates.

Chapter six provides a flavour of the horses and connections who have triumphed since the Irish Hospital Sweepstake sponsorship ended in 1985. Galileo, Montjeu, Salsabil, Sinndar, Hurricane Run, Generous, Old Vic, High Chapparal, Camelot and Australia were all top class winners of the race and the text of this chapter races through some of those renewals with short summaries of some of those horses wins and careers giving a real flavour of what may, in hindsight, and for now at least, have been the race’s golden era (Magee acknowledges, in his closing paragraphs, that the Ballydoyle domination and the ‘dwindling’ of the overseas challenge, both in number and quality, mean the future of this race presents some tricky questions for Irish racing and the Curragh.)

The final 40 plus pages catalogue details of all the winners between 1866 and 1961 and then full result details (with all runners) from 1962 onwards, with a comprehensive index to conclude.

Whatever the future does indeed hold for the Irish Derby, there is no doubt the race has a rich history, littered with the sort of tales one would associate with one of Europe’s great races, particularly one held in a country where racing is part and parcel of the fabric of the place and its people. And, while the book will not perhaps be regarded as a historical reference work, it serves its stated purpose as a celebration of the Irish Derby’s first 150 renewals wonderfully.

Extremely readable and lavishly illustrated with a selection of fantastic photographs, I’d highly recommend it as engrossing, entertaining and interesting.