Book review : The Eccentric Queen of the Sport Of Kings : DOROTHY PAGET by Graham Sharpe and Declan Colley 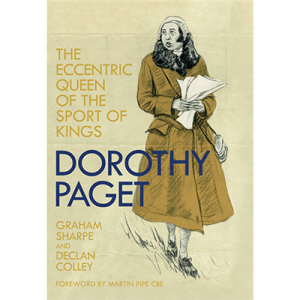 It wasn’t until relatively recently that I’d learned that Dorothy Paget was only 28 when she led in Golden Miller after the first of his five Gold Cup wins in 1932. I’d always assumed, from the evidence of photographs, that she was older, her large frame, encompassed in that trademark heavy coat and unflattering headgear, giving lie to her youth. That intriguing and, to me at least, surprising fact had me eagerly anticipating the new biography of Miss Paget, written by Graham Sharpe and Declan Colley.

For what kind of young woman in the male dominated society of the time, within an almost exclusively male dominated sport, came to own the horse who was to stamp his name on racing history? The answer was, as you’d expect, a pretty remarkable one.

On opening the book I found another surprise. The foreword was written by the former trainer Martin Pipe who is, it turns out, a Dorothy Paget obsessive. Pipe claims that he used to get up in the middle of the night to trawl through the collection of Dorothy Paget artefacts he’d collected (he owns a very large collection of Paget memorabilia, much of which was used to help research this book) . ‘I fell in love with Dorothy Paget’ Pipe writes in a foreword that further fuelled my eagerness to find out more.

Sharpe and Colley set out by describing Paget’s family background. Privileged though it was (she came from a background of immense wealth and herself inherited a vast fortune at the age of 11), it wasn’t straightforward and, as is the case with all humanity, those early years are an important part of the story, explaining perhaps just where the source of some of Paget’s legendary eccentricities lay. Descriptions of her ancestors brought a smile as early as page 1 as a description of an exchange between one of Paget’s ancestors and the Duke of Wellington is recounted.

The story of her early years paint a sad portrait of a child growing up in an environment where material needs and wants were abundantly met but where emotional growth seems to have been stifled. This impression is accentuated by Sharpe and Colley, setting the scene for the adult Paget, whose bizarre and eccentric behaviours and impenetrable psyche contributed to her becoming the twentieth century’s most celebrated and famous female racing icon.

Racing fans will enjoy the story of Golden Miller’s career. This famous horse, correctly regarded as one of the all-time greats of National Hunt racing, was the equine figure that transported Paget out of the narrow and heady confines of high society into national prominence. He was also the horse whose Gold Cup and Grand National double in 1934 netted his owner the modern-day equivalent of £18 million in winning bets, an indication of the fearless nature of Dorothy Paget’s assaults on the betting ring.

The events surrounding her were quite remarkable. In addition to heavy gambling and lavishing uncompromising sums on racehorse purchases, Paget’s behaviours were, even by the standards of a time when largesse among the wealthy often resulted in carefree abandonment of societal norms, wholly unpredictable and in some respects selfish. Sharpe and Colley describe these in a way that is somewhat sympathetic to Paget, while at the same time suggesting that the impact of those behaviours on those involved with her was often not the most positive experiences.

The descriptions of Paget’s racing empire and her varying relationships with trainers and jockeys, many of whom were long suffering as they attempted to meet the often highly irrational and unreasonable demands of their patron, are interesting. Cath Walwyn, widow of one of Paget’s trainers Fulke Walwyn, provides an honest appraisal of what it was like to deal with Paget, the owner, while also stating that she felt that Dorothy, the person, was hard done by, particularly by the press. ‘She did a huge amount for racing. They never gave her enough credit’ she says. Walwyn cites Dorothy’s shyness and nervousness around the press as the reason Dorothy’s relationship with them became strained and why they were unsympathetic towards her.

That shyness and nervousness was to exhibit itself in other ways. She’d arrive at the theatre after shows had started so she could make her way to her seat in the dark. Once the show was over she’d be among the last to leave the venue, something that also happened on the racecourse, one poor employee having to phone his boss way into the evening, long after racing had finished, to complain that Paget and her entourage were still on the premises.

It is these insights into her personal life that I found most absorbing. Apart from Golden Miller, whose career is gone into in some depth, accounts of her racehorses are brought to bear only where they have an influence on events, the landing (or failing) of a gamble or, as with her Derby winner Straight Deal, when the result is particularly important to her life.

Perhaps the greatest insight into Paget’s unorthodox manner of living is outlined in the chapter entitled ‘Dorothy At Home’ and I think this was my favourite section of the book.

One-time employee Hermione Llewellyn provides a telling account of Paget’s lifestyle. ‘…it did not take me long to realise that Dorothy was a dreadful tragedy.’ She describes Paget as ‘clever, quite young, immensely rich and marvellously generous to those she recognised as unfortunate.’ But she also paints a poignant portrait of what it was to be Dorothy Paget. She ‘hid herself away day and night from the world she belonged to….she had made herself into a monster. Her Russian refugees, her horses and her food were her only interests.’

Sharpe and Colley describe how her obsessive interest in gambling almost led to her financial ruin. She was a legendary gambler, but not a successful one in the long run, leaving fortunes in the ring on many occasions. Although she inevitably won big from time to time the bookies grew to learn that she’d soon return to give it all back and lots more besides.

Sharpe’s bookmaking background and contacts ensure that this element of the book is both colourful and authoritative and the chapter entitled ‘Gambling With Her Financial Empire’ illustrates vividly just how different the betting and racing environment was during those heady days from the 1930s to the 1960s, days when sums that would be considered astronomical in today’s betting market were often gambled. There is little doubt that Dorothy was one of the biggest gamblers of the twentieth century and the authors’ accounts of some of the gambles landed and of those that (all too often) went astray make for entertaining reading.

I was saddened to read in that chapter of the likelihood that William Hill, one of the towering bookmakers of the day whose name still adorns the high street, probably arranged for the stopping of Dorothy’s horses when it was beneficial for him to do so. Even sadder to think that Dorothy probably felt a level of trust between the two as it was Hill who would allow Dorothy to bet on races which had already been run. Her sleeping hours meant she would get up long after racing had finished but, still anxious to feed her compulsion to bet, she found a willing partner in Hill, he no doubt comfortable in the knowledge that Dorothy was a massive loser when gambling and also that he would be able to influence results on the occasions she had the money down before the race.

She was undoubtedly a complex character but also an extremely private one, inhabiting what was, by the end, a lifestyle that Sharpe and Colley portray as a hermit-like existence. Sheltered throughout her life by a small band of loyal staff and ‘paid companions’, Paget’s true character is hard to decipher. Sharpe and Colley are able to give a glimpse of her from the evidence of events and encounters she had along the way but I found myself wondering through the book what the psychological drivers were that drove the patterns of behaviour.

I was delighted to find just such an appraisal appearing in the Postcript, written by John Karter, formerly a writer on racing for The Times and a psychologist, a man ideally suited for the task. Karter points the finger firmly to her upbringing and cites various pieces of psychological evidence and circumstance to support his view. ‘Given this background of emotional deprivation and pressures of many kinds you do not need to be a psychological genius to work out why Dorothy’s ways did not conform to what people regarded as normal…’

Karter is, as are Sharpe and Colley, keen to be sympathetic to Dorothy Paget, while acknowledging her flaws. ‘Yes, she could be demanding, capricious, and idiosyncratic, but look beneath the public image and you will find a woman with a heart of gold, who liked helping people as much as she liked to get her own way’.

The book will go some way to redressing the media-fuelled public perception of Dorothy Paget and for generations to follow this volume will surely influence how she will be regarded when racing’s historians dwell on the characters that shaped horse racing in the twentieth century.

The book is well written in an engaging style, the research comprehensive and detailed and it’s thoroughly recommended to all who have an interest in racing’s history or who wish to cultivate one.

It is available, priced at £20, with a £5 discount off the £25 cover price, from publishers The Racing Post by following this link https://shop1.racingpost.com/PAGET-p/dotpag.htm