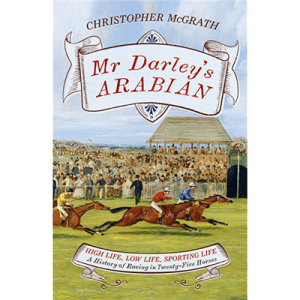 The premise of Christopher McGrath’s book Mr Darley’s Arabian is quite simple, but inspired. Through the twenty five generations that comprise the male line of the pedigree of that greatest of all modern racehorses, the mighty Frankel, it tells the story of each of the horses who link the Darley Arabian, one of three founding stallions of the thoroughbred breed, to Khaled Abdullah’s great champion.

In doing so it also sets out to tell the history of the sport of racing itself, the events and the people that have defined it through three centuries.

The first thing that is apparent is that the book has been meticulously researched. It is rich in detail and that detail continues relentlessly throughout the entirety of the book. This renders it a read that requires attention but it manages to hold that attention as it races through three hundred years at a fast gallop.

Along the journey we meet most of the great characters who have graced the turf. Some will already be familiar to anyone with a passing knowledge of racing history. About those we are already familiar with we learn more through a series of little snippets (Sir Henry Cecil’s ironic purchase of a skull emblazoned tie on a trip to Dubai during his final winter says so much about Sir Henry’s sense of humour and sense of style, for example) as McGrath’s research adds additional touches, colours and highlights to already familiar portraits.

But we also meet many equine and human characters we may not be as familiar with, men of dubious morality, men for whom the horse was merely a vehicle through which the accumulation of wealth could be realised, often through morally questionable enterprise. We meet royalty, convicts, men of violence and various people of great, and sometimes not so great, character. People who have made the sport what it is today and those who might have destroyed it.

It is clearly a labour of love on McGrath’s part. You can tell he relishes the history of the sport and the stories it has harboured through the centuries. His enthusiasm is infectious and it isn’t long before you’re drawn into this journey through racing’s history. It’s a bit like being taken inside one of those virtual reality simulators and sitting there seeing racing’s three hundred years flash by, you’re thrown around a little here and there but it is thrilling enough and you emerge at the end unscathed and eager for more.

If you are interested in racing’s story, interested in tales of deeds and the stories of those who commit them and, indeed, interested in Frankel himself, then you’ll find this an invigorating and essential read. I’m sure as the years pass it’ll be earmarked for a place in any racing fans ‘must-read’ list and I thoroughly recommend it.