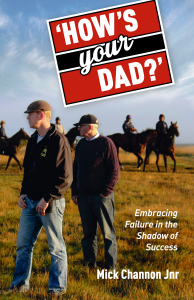 The title of Mick Channon Jnr’s debut book ‘How’s Your Dad?’ tells you what you need to know about the theme of this exploration of a relationship between father and son. Mick Jnr, as I am sure everyone knows, is the son of famous former England footballer turned racehorse trainer Mick Channon. While he’s benefited from that association Mick Jnr has clearly found it hard to forge his own identity and the shadow of his father and his father’s success has fallen long on his life. This book explores Mick Jnr’s struggle to make his own mark on the world and his difficult but sometimes amusing relationship with his father.

I normally beat around the bush and arrive at my conclusion at the end of the review but let’s start by making it quite clear. If you buy only one racing themed book this year, this should be it.

It is very honest, very funny and written in a warm engaging way that has you not only rooting for Mick Jnr through the various rites of passage failures he suffers as he finds his way in life but also has us sympathising with Mick Channon Snr, his son’s insight into Mick’s character revealing a man whose external persona may be, as it is for many, a veil for his insecurities and internal demons.

Mick Snr’s portrayal as a straight-talking, grumpy and generally miserable character could easily have led to the reader finding him an unappealing personality but his emotional and physical frailties are laid bare in such an amusing but honest and occasionally poignant fashion by his son that we are left feeling about Mick the way we might feel about a grumpy but loveable old uncle.

The book has two strands. One is a diarised account of the 2015 racing season covering both day to day life in the busy West Ilsley racing yard where Mick Jnr assists his father in the training of a large string of horses and also touches on the significant events which happen in their personal lives throughout that year, notably the illness Mick Snr suffers towards the end of the year which, as these things tend to do, amplifies Mick Jnr’s feelings about his relationship with his dad.

The second strand is a series of chapters which look back to earlier events in Mick Jnr’s life, these being slotted in between the chapters which deal with the diary.

The two strands work well together. As we journey through the tribulations of the 2015 season, the unfolding events in Mick’s earlier life put into context the building of the relationship with his father. A relationship and a life that sees them end up in Mick’s ‘gallop wagon’, overseeing morning work, that most critical of a trainer’s tasks. Mick Jnr now with no escape from the sometimes amusing but often depressing and demoralising moods and behaviours of his obsessively driven, workaholic father.

He recounts how he witnessed with great amusement, along with another former footballing great, the late Alan Ball, his father giving a traffic cone, which happened to be in the wrong place at the wrong time on the gallops, not only a good, proper bollocking but also a right kicking. But he also tells us that his father’s behaviour and company is not always such fun. ‘The search for an enemy is on today, real or imagined, to rage against – preferably to intimidate – at times like this he can be an incredibly unpleasant person to be around.

The writing style is unpretentious, easy to read and ideally suited to the openness and honesty with which Channon Jnr describes his life. Those of you for who, like me, Channon Jnr is a fringe figure we know little about will find his self-deprecating and humorous take on life appealing and it isn’t long before we get to know him as a likeable and very human character whose younger days away from his father’s side offer much entertainment in their own right.

But it’s the relationship between father and son which is obviously at the core of the book. I’m sure many readers will empathise with Mick Jnr’s attempts at pleasing his dad, the difficulties he’s had developing a relationship with him and the changing nature of that relationship as both have grown older.

That it is set against a horse racing backdrop is incidental in many ways but racing fans will find the descriptions of life at West Ilsley interesting and absorbing.

Laugh-out-loud funny in many parts, touching and affecting in others, with the balance between the two delicately maintained, Channon Jnr has perhaps finally found his own niche, that thing he can excel at in his own right, because this is a book that deserves, and I’m sure will receive, widespread recognition and reading. I am already looking forward to his next.

One thought on “Book Review – How’s Your Dad? by Mick Channon Jnr”

Wow....now that is a statue

A couple of 12/1 shots to consider for tomorrow - both run at Kempton https://theracingforum.co.uk/racing-articles/david-cormacks-saturday-selections-february-27th/