Still just time to get them delivered for Christmas so if you need to get something for the racing buff in the family (or get it for yourself, why not?) here is a review of something you still have time to order and get delivered in time for it to land on Santa’s sleigh. 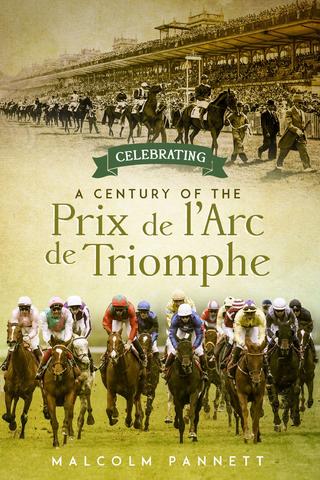 Malcolm Pannett has had a variety of jobs in racing journalism since 1988 although this appears to be his first book. In the foreword he describes a burgeoning interest in French racing that took hold in the 1970s courtesy of the likes of Nijinsky, Mill Reef, Yves Saint-Martin and Freddy Head.

The structure of the book is straightforward. After a brief introduction that runs to just over three pages Pannett goes on to present a small essay on every running of the race to date since its inception in 1920. Each essay lasts around 3 pages and follows a particular structure that is maintained throughout.

For each renewal he outlines a ‘Background and fancied horses’, ‘Betting’ (which includes a summary of some of the important form-lines coming into the race). ‘The race’ in which he describes how the race unfolded, ‘Post-race’ describing what happened to the main players later in their career and, finally, ‘Result’ which details all the finishing positions, weights carried for first three, breeding detail for first three and owner/trainer/jockey for first three.

No mean feat to condense those details for each running to just three pages but that is what Pannett does with success.

It is clear from the outset that it is very much a labour of love. A self-confessed ‘history geek’ Pannett has researched his topic extremely thoroughly and he manages to pack in lots of information into his descriptions of each year’s race. You could fill a book on each race really so to condense into three pages runs the risk of a very shallow description but Pannett balances that tightrope well enough. What you get is glimpse into each running rather than a fully detailed account but that glimpse is relatively comprehensive and the amount of detail and clearly well researched information compensates for any brevity.

As a lover of the race (as most of us racing fans are I think) it was a great read. I read it quickly and it did get a bit overwhelming in terms of information overload when reading many years one after the other and I feel the book would be better enjoyed at a more leisurely pace, maybe a couple of essays a day or something like that.

Plenty to learn, particularly about the earlier races with which I wasn’t that familiar. I wasn’t far into the book when I’d learned that the Eiffel Tower is built on the site of an old racecourse (Champs des Mars), that the race title was co-opted from a selling race and I also discovered how John Gosden’s Clarehaven stables had been so-named. The book continued to throw up these snippets throughout, including the following from my own favourite Arc in 1974. Allez France won for the legendary hard-to-please owner Daniel Wildenstein but Pannett describes that not even reaching what, for most people, would be the summit of  racing ambition was enough ‘Daniel’s horses had finished first and fifth but the irascible art dealer was not over the moon.’

It is a nice work of reference (it has a set of appendices and a fully detailed index) and is sure to provide anyone with a passing interest or more in French racing in general or the Prix De L’Arc de Triomphe in particular with many absorbing hours. It even features one of TRF’s former regular contributors in the acknowledgements but you’ll need to buy it to find out who.

Perfect as a Christmas gift for those looking to while away the days during the holidays, and for those flat fans looking for an antidote to Kempton and Leopardstown it will be manna!

‘Celebrating A Century of the Prix De L’Arc de Triomphe’ is published by Pitch Publishing and is available from Racing Post Books (who are currently doing 25% off selected titles if you order 3 or more) as well as a range of online retailers.