Book Review – A Year In The Frame  by Edward Whitaker 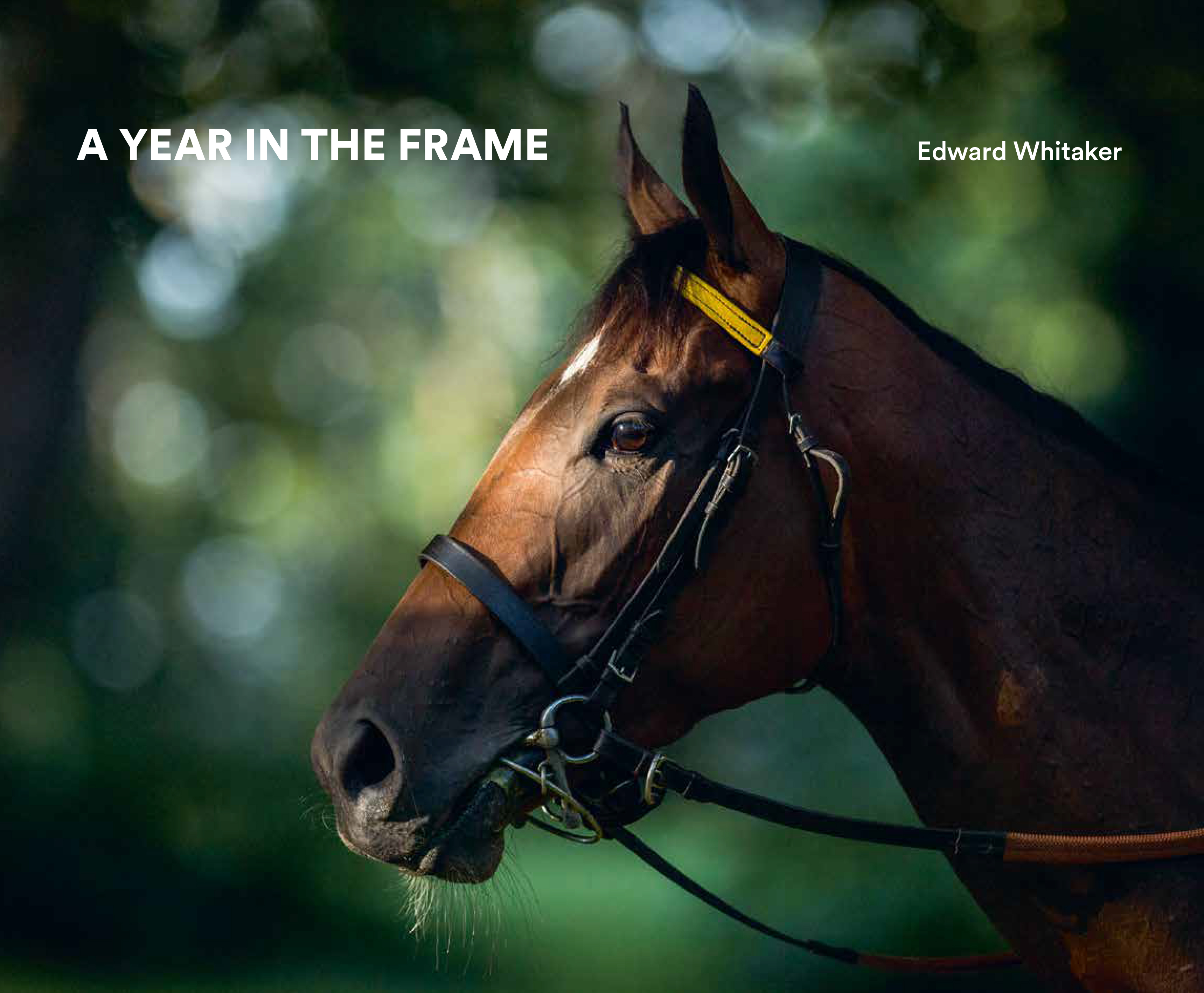 When people talk about what is great about a day at the races they will almost certainly mention the colour and the spectacle. The lush green carpet of grass, the blue skies, the jockey’s silks flashing reds and blues and yellows as the horses pass by at speed. Often it is the very audience themselves that provide the backdrop. ‘Dressing up’ for the races is now no longer confined to Ascot or Epsom and you can visit any racecourse and see outfits of all colours, shapes and sizes adding to the visual appeal.

And of course, any marketing guru worth his salt would have the inherent beauty of the thoroughbred high up on the list of unique selling points when compiling a strategy to sell a racing event. Attractive on the eye when standing still or walking, they transform into objects of splendour when galloping at speed, coats shining, hooves flashing, manes and tails flowing.

Throughout the history of the thoroughbred, artists have set out to capture the spirit and essence of the racehorse. Not only artists with brush and paint, artists with lens and shutter have also been captivated by this spectacular animal and the sport that is its purpose.

Edward Whitaker’s previous collections of racing photographs have been greeted with acclaim. His first collection, In The Frame, won Best Illustrated Book in the 2008 British Sports Book Awards. His second, Beyond The Frame, won Horse Racing Book Of The Year at the same awards. He’s worked for the Racing Post since its inception and is a multiple winner of Horse Racing Photographer of the Year and Sports Journalist of the Year awards.

This newest book, A Year In The Frame, is deserving of similar accolades as the images within its 175 pages capture the atmosphere of the sport of racing in a way no written word could do in a thousand pages.

A Year In The Frame takes us, as suggested by the title, through racing’s calendar year, month by month (the photos are not from one individual year I should add but a selection from the last half dozen or so years).

From January, where the weather takes its grip but where also are born the beginnings of dreams on Newmarket’s Warren Hill gallops, through February, where the British jumping season is juxtaposed against shots from a sunny Qatar.

As the year unfolds in the book, the places, people and horses are each given their moment.  Cheltenham, that theatre of dreams, provides an obvious focus for March but it too is set against the starkest of contrasts with shots from Dubai and the festival that culminates with the Dubai World Cup.

And so we continue through the year, the photographs relaying that familiar pattern of the racing calendar, picking out the moments that will define the period for a generation of racing fans, as with Frankel who features in a couple of the photos.

There are a large variety of different types of shot. Posed portraits, unguarded moments, the glamour and thrill of winning and the long hours and hard work behind the scenes are all laid bare in a range of photographs that displays Whitaker’s skill not only with the camera but in understanding people and horses too.

But he is perhaps at his best capturing the action on the track. There are two mid-race shots, one from Goodwood featuring the flint wall in the foreground and one from Longchamp with the Parisian skyline as a backdrop which I particularly like.

My own personal favourite photograph from the book is one from the November section. It features JP McManus walking alone along a deserted railway platform after travelling from London to see two of his horses win at Plumpton. In a late-afternoon chilled liquid sun, he has one hand in the pocket of the long black overcoat he is wearing and the other carries a hessian bag containing the winner’s trophies from the day. A Racing Post sticks out of the other coat pocket. He is smiling, faintly but unmistakeably. I think it is a photo that captures JP McManus as well as any I’ve seen.

Each photo has a brief accompanying explanatory paragraph but, in truth, little by way of words are needed. Whether it is the shot taken from behind Frankie Dettori as he salutes the crowd in front a packed Longchamp stand aboard Golden Horn as the last Arc run at the old Longchamp heralded its winner or the anxious final moments of Black Caviar’s breathtaking Royal Ascot win, Luke Nolen crouched forward having almost misjudged the final strides, words are often superfluous.

The book has 175 pages, the photos filling a page each (barring a two page collage of multiple Ascot fashion shots) in landscape format. It is beautifully presented and features a foreword By Ed Chamberlin of ITV racing who heralds Whitaker’s sublime skill in continuing to showcase his talent despite facing ‘the same challenges again and again’.

If your Christmas list is looking a little empty you could do far worse than stick A Year In The Frame on to the very top of it and, even better, why wait until then? Any racing fan will find this book a pleasure not only now but in years to come when the memories of the people, horses and events captured within its pages have begun to dim. Those memories will be rekindled and brought to life as vividly as the day they happened thanks to this wonderful collection.

Oh, and if you are in a pub quiz and are asked ‘what do Joanna Lumley, Nigel Farage and Tom Cruise have in common?’ you can win a point for your team by answering ‘Edward Whitaker’s A Year In The Frame’.

Edward Whitaker’s A Year In The Frame is published by Racing Post Books and is available from www.racingpost.com/shop priced at £30.